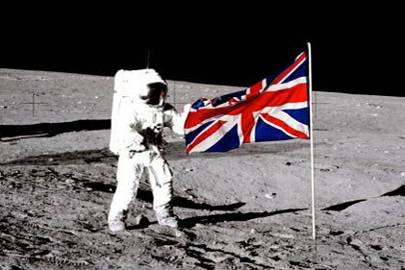 Alert: This is a Thinking Spaces opinion piece not an official piece of academic research – please engage and remember: these are often musings, not findings.

This is the beginnings of an article I am currently writing comparing the most recent recruitment campaign by the British Army which played homage to the orginal ‘Kitchener Recruitment’ posters from the beginning of the First World War. 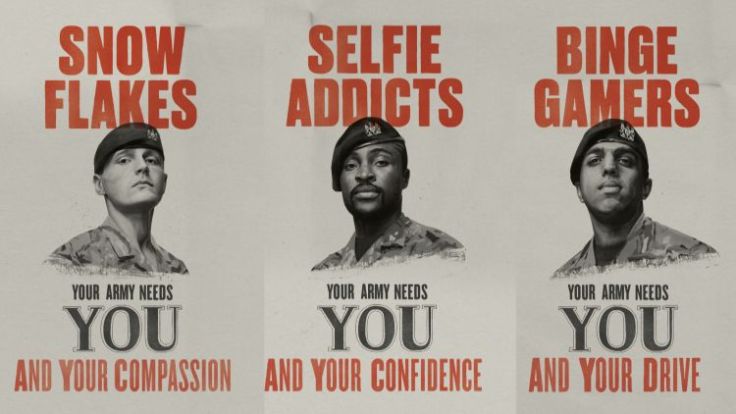 This derisive campaign from 2018 split public opinion the moment that it was released.  Social media forums were flooded with opinions over the message and the medium in which it was being presented.  Arguments ranged from the targeted demographic feeling insulted by the unilateral insinuation of singular focus and worth; whilst others argued that ‘millennials’ and ‘Gen X’ displaying these traits were an unwelcome addition to the armed forces. 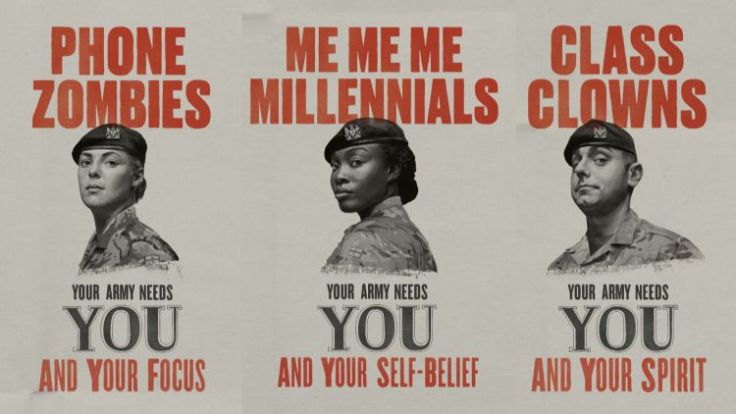 Major General Paul Nanson, General Officer Commanding, Army Recruiting and Initial Training Group stated in defence of the campaign that: ‘the Army sees people differently and we are proud to look beyond the stereotypes and spot the potential in young people, from compassion to self-belief.’  This is an admiral (not a General – ha pun) statement and one that makes logical sense when a British Military commission research study from 2016 that suggested 18-35-year-olds were spending an average of three-and-a-half hours on video games and social media.

However, this campaign does not seem at first glance to have been especially effective.

As the statistics from the most recent MOD report demonstrates, there was a 15% decrease in enlistment over the course of 2018.  Further reading of the report demonstrates that there is a steady decline in the number of serving personnel which recruitment campaigns are failing to plug.  However, the blame can not be solely focused on the backlash from a single recruitment campaign.  Indeed for the majority of these declines, the ‘Can I be…?’ campaign which tackled issues such as religion, gender, and sexuality, was the primary recruitment message of the time.  Additionally, Numbers within the British Army in 2019 have now fallen to just above 75,000, a stark deficit of nearly 9000 needed to hit the 2020 targets.  This decline continues the trend that has continued for eight years as enlistment and training has failed to match retirement and demobilisation of soldiers.

There is a larger discussion to be had here about the popularity of military service in the 21st century.   I am sure I will write that in another post (and probably the article), but for now, let’s return to the failed recruitment campaign and its inspiration. 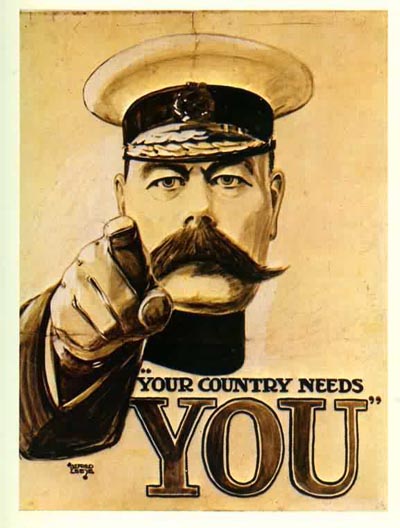 At the outbreak of war in 1914, Lord Kitchener literally became the face of the British Army recruitment campaign.  He was a striking figure, with eyes that followed you, a mustache of inevitable power (maybe not the last one – although there maybe an argument that Kitchener and Thanos have a lot in common).  Historians now debate to what extent the poster of Kitchener directly encouraged men to volunteer.  The glory days of August and September 1914 with nearly 900,000 men signing up as part of Pal’s Battalions did not as much owe these incredible numbers to Kitchener’s stern glare, but more as a consequence of a myriad of personal and social factors.

Here the first link between the two posters becomes evident – neither campaign managed to achieve what it was designed to.   The next commonality lies potentially in the art of shaming. 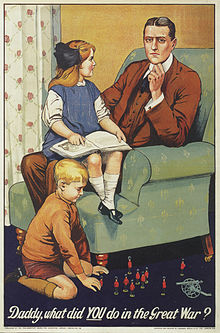 The shame of not meeting Kitchener’s eyes was not as blatant as the above poster also from the First World War which directly challenged the masculinity and honour of the men of Britain in an attempt to get them to enlist.  Kitchener’s gaze had help from members of the public, usually women, who handed out white feathers to men they encountered not in uniform as a mark of cowardice.   This was an effective, and arguably cruel, tool for recruitment.  In 1915 Gunner Frederick Broom reenlisted after being demobilized for suffering a particularly bad case of typhoid and being given a white feather.  Broom was still only 16 when he returned to the Army still convalescing.  He did not see his 18th birthday. 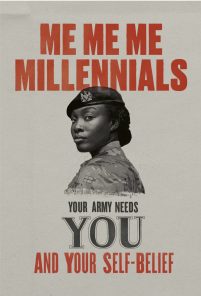 The ‘snowflake’ campaign seemingly bares similar hallmarks, albeit from a more subtle perspective.  The previous ‘Be The Best’ campaign had been the staple for British Army Recruitment for many years.  These advertisements touched on issues such as competition and self-actualization; a message still found in the ‘Born in… Made in the Royal Navy’ recruitment campaign today.  However, in 2016 these campaigns reportedly drew criticism for being elitist, however again this is questionable.  In comparison, the ‘Snowflake’ campaign plays again on societal negative perceptions and seemingly dares those branded with these terms to do better.   ‘Come into the Army because we appreciate the values which are currently unfashionable in common society’ – it seems to say.  Here the notion of shame remains at the heart of the message with the overtone purporting- join the Army, improve yourself, and become more socially acceptable.

Shame advertising can be found in other conflicts as, particularly the Second World War.  However, perhaps this view is too harsh and blinkered.  Tradition has always been a powerful motivator within Great Britain.  70 years after the Empire finally crumbled into dust, pro-Brexit rhetoric is bolstered by arguments of ‘Britishness’ and British supremacy.  While at one point the sun may never have set on the Empire, with the minds of the select few, the moonrise is forever absent in the eternity of rightful British rule.

The Snowflake campaign reiterates notions of inclusion and national pride in the same way that Kitcheners Poster attempted to galvanise enlistment on the same issues, and this is potentially a powerful tool.  While figures may have been on the decline for nearly a decade, the current campaign has the virtue of making newsrooms, blogs, and dining table conversations around the country.  This potentially is a success of sorts then.

However, according to some reports, the campaign is a resounding success as recruitment figures have doubled since the release of the new adverts.  The British Army reportedly told The Daily Telegraph that the controversial advertising campaign had been a “resounding success” and that applications to join had doubled in the first month of 2019.  Yet, the Guardian in March 2019 claimed that the campaign, while successful, was immoral and targeting impressionable young people during ‘the January Blues’.

People are still talking and sharing about the campaign.  It’s a combination of tradition, self-reflection, and cultural challenge is arguably inspired, if potentially a touch immoral.  Regardless of personal views, which is often difficult, objectively this modern campaign demonstrates how the British Army has consistently attempted to self-reflect and grow within 21st-century society.  The Snowflake campaign is obviously derisive and there is a bravery in that.  Recruitment is a dirty business, ask any agency consultant, if you can find a sober one, and campaigns such as this are often a risk.  However, the snowflake campaign seems to question the status quo by unapologetically upsetting everyone – surely there is some degree of equality in that.